Implementing a Laboratory Test Under Emergency Use Conditions 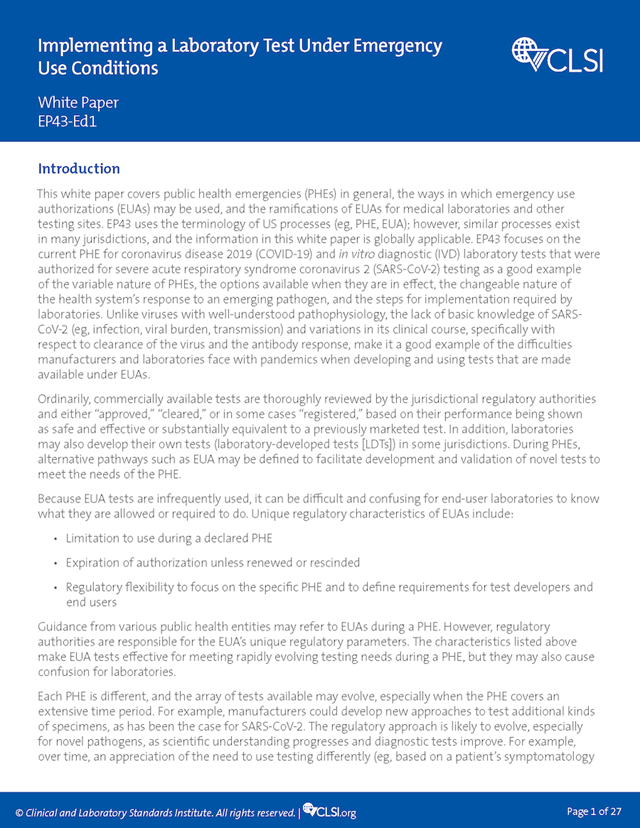 CLSI has published a white paper,  EP43—Implementing a Laboratory Test Under Emergency Use Conditions. EP43 covers public health emergencies (PHEs) in general, the ways in which emergency use authorizations (EUAs) may be used, and the ramifications of EUAs for medical laboratories and other testing sites. The paper uses in vitro diagnostic (IVD) laboratory tests that were authorized for severe acute respiratory syndrome coronavirus 2 (SARS-CoV-2) testing as a good example of the variable nature of PHEs, the options available when they are in effect, the changeable nature of the health system’s response to an emerging pathogen, and the steps for implementation required by laboratories.

Ordinarily, commercially available tests are thoroughly reviewed by the jurisdictional regulatory authorities and either “approved,” “cleared,” or in some cases “registered,” based on their performance being shown as safe and effective or substantially equivalent to a previously marketed test. In addition, laboratories may also develop their own tests (laboratory-developed tests [LDTs]) in some jurisdictions. During PHEs, alternative pathways such as EUA may be defined to facilitate development and validation of novel tests to meet the needs of the PHE.

Because EUA tests are infrequently used, it can be difficult and confusing for end-user laboratories to know what they are allowed or required to do. Unique regulatory characteristics of EUAs include:

EP43 follows the Test Life Phases Model introduced in CLSI’s free document EP19, which describes how CLSI documents can be useful for a manufacturer that develops and validates a test, as well as the end-user laboratory that implements a test. For all tests, including those covered under an EUA, the performing laboratory is required to verify performance claims as part of implementation. This white paper focuses on ways laboratories can stay abreast of rapidly emerging information and how they can implement tests issued under an EUA.