The History of CLSI

This year CLSI proudly celebrates 50 years of service in the field of public health as a standards development organization for medical laboratory testing.

Originally formed as the National Committee for Clinical Laboratory Standards (NCCLS), the idea for the committee arose from the technological revolution in clinical laboratory products that grew in the 1960s. This rapid advancement in technology hastened the need for quality control and standardization in laboratory testing.

Specifically, NCCLS was formed by a group of 31 individuals in an effort to standardize blood chemistry testing. In December of 1967 the US Centers for Disease Control (CDC) distributed a news release announcing the intention of representatives from scientific and professional groups and government agencies to form a national committee on clinical laboratory standards. The group met at the urging of the College of American Pathologists (CAP). The members agreed to the need for a committee and formed the Provisional National Committee for Clinical Laboratory Standards (NCCLS). Dr. Russell Eilers, who was Chairman of the Standards Committee for CAP, was elected temporary secretary for NCCLS, and went on to become its first president. 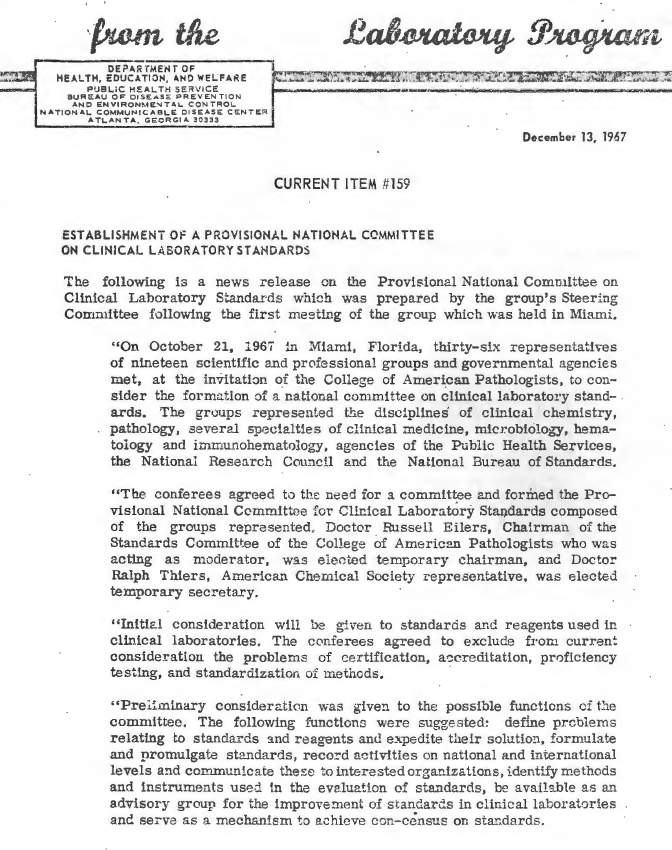 View the news release from December 13, 1967 announcing the formation of the NCCLS, which would go on to become CLSI.

NCCLS was formally organized in 1968 by representatives of the groups most affected by the rapid growth in laboratory technology of the 1960s: laboratory professionals, the industries that supply and support them, and regulatory and non-regulatory governmental agencies, such as the CDC and US Food and Drug Administration (FDA). NCCLS published its first standard, Preparation of Manuals for Installation, Operation, and Repair of Laboratory Instruments, in 1969. During NCCLS’ first ten years, twenty laboratory standards were written.

The Consensus Approach to Standards Development

The October 1976 edition of Pathologist newsletter is dedicated to “The Role of Professional Organizations in the Establishment of Standards and the Evolution of the NCCLS.” The authors describe NCCLS:

“The NCCLS…is a truly unique, sophisticated, and representative organization of virtually all groups and segments of the field of laboratory medicine. The success of the committee has been built on two pillars: The consensus approach to standards development and the balance of representation by the professional organizations, the industry, and governmental agencies.” 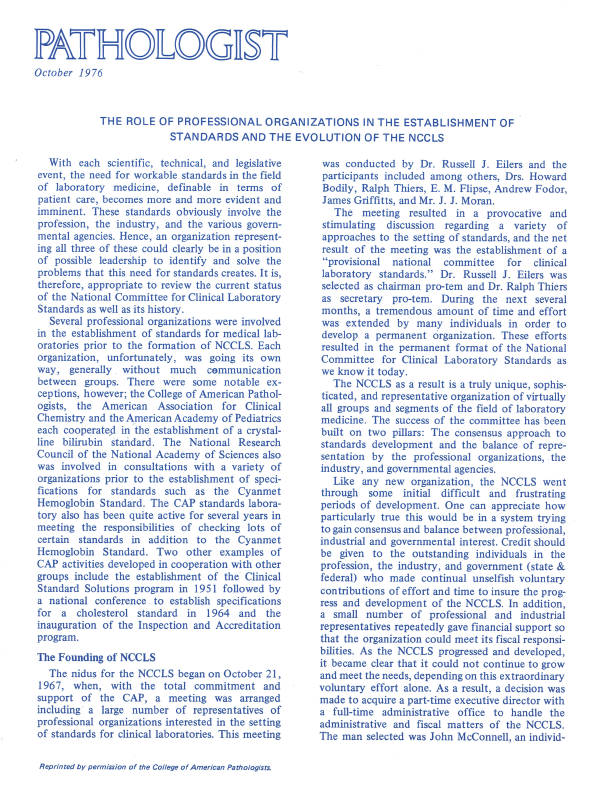 Fifty years after its inception, CLSI still follows the consensus approach, as well as ensuring an equal and fair balance of representatives from the professions, industry, and the government.

Accreditation and National Reference System for the Clinical Laboratory

In 1977 CLSI was accredited by the American National Standards Institute (ANSI) as a voluntary consensus standards organization. At about this time CLSI also became the home of the National Reference System for the Clinical Laboratory (NRSCL), a collection of standardized reference systems intended to make laboratory test results more uniform. This came about as a result of the Conference on a National Understanding for the Development of Reference Methods and Materials for Clinical Chemistry, held in November of 1977 and sponsored by the CDC, NCCLS, as well as some professional societies and industry organizations.

View the brochure for the Conference on a National Understanding for the Development of Reference Methods and Materials for Clinical Chemistry.

Expansion of Area Committees and Recognition by World Health Organization

By 1985, more than eighty standards had been written, more than 130 standards projects were being carried out, and more than 1,000 clinical laboratory scientists had participated in NCCLS standards projects. By this time the original three area committees of Clinical Chemistry, Hematology, and Microbiology had expanded to eight area committees spanning all major clinical laboratory sciences. Additionally, NCCLS still retained primary management and administrative responsibilities for the National Reference System for the Clinical Laboratory. In this same year, as evidence of NCCLS’s international influence, the organization was designated as a World Health Organization Collaborating Center for Clinical Laboratory Standards. 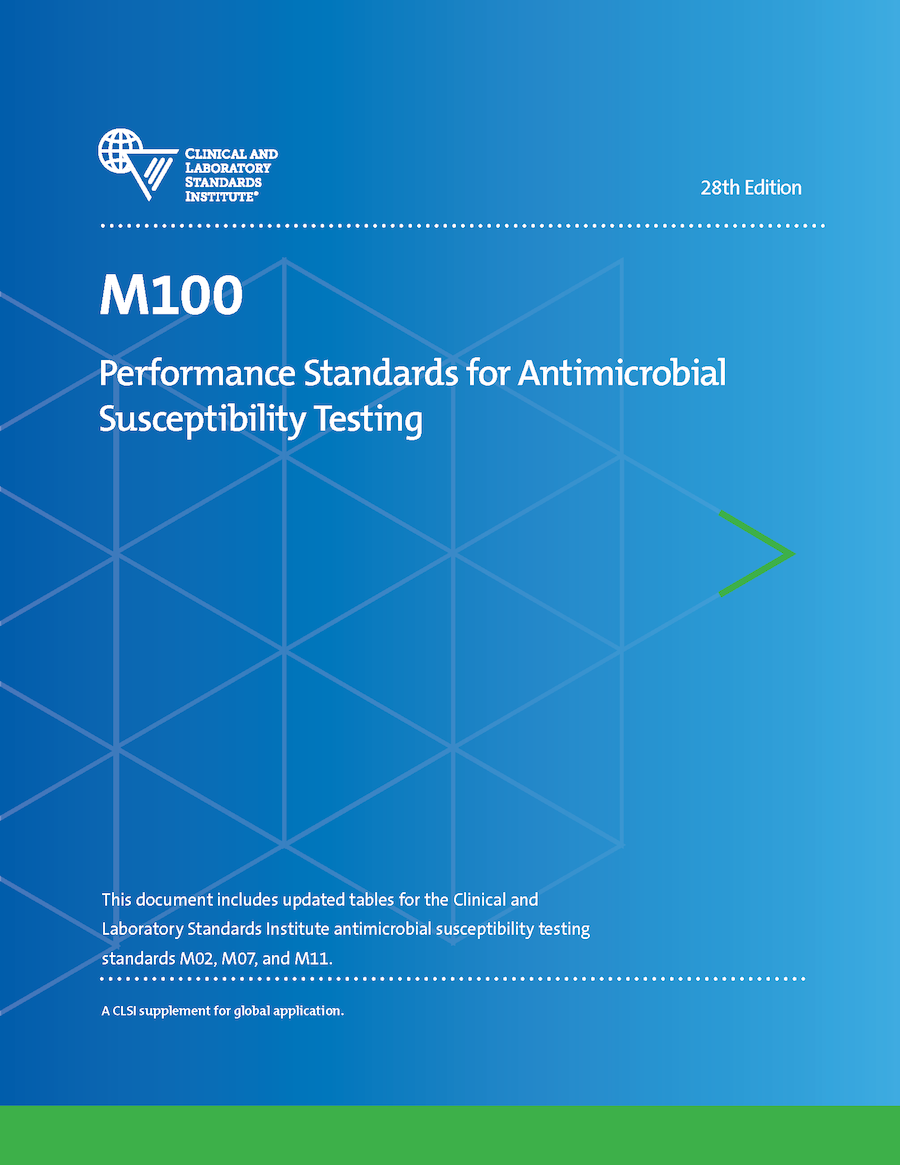 Through successful standards projects NCCLS was able to document and advance state of the art processes and procedures in the field of laboratory medicine. Through the cooperation of clinical microbiologists, laboratory industry professionals,and regulators, NCCLS standards for antimicrobial susceptibility testing (AST) became a model for improving laboratory practice through voluntary consensus. In December of 1986 NCCLS published the first edition of M100—Performance Standards for Antimicrobial Susceptibility Testing. M100 provides up-to-date AST breakpoints to laboratory professionals. This information helps health care providers treat their patients with the most effective antimicrobial drugs, as well as helping to slow antimicrobial resistance (AMR). AMR is currently one of the top global health threats. CLSI continues to publish M100 annually.

CLSI’s Work with the International Organization for Standardization

By its 25th anniversary in 1993, NCCLS had more than 1,800 active member organizations and institutions, and had published over 300 standards and guidelines. In 1997 the International Organization for Standardization’s Technical Committee 212 (ISO/TC 212) was proposed and was organized by NCCLS. Its purpose was to develop and harmonize voluntary international laboratory standards. NCCLS accepted the responsibility for managing ISO/TC212, which is an international committee whose purpose is the development of standards and guidelines in the field of laboratory medicine and in vitro diagnostic test systems. In addition, NCCLS was also given the responsibility of administering the US Technical Advisory Group for ISO/TC 212, which is a separate, national role in which NCCLS facilitates US participation in the standards development work of ISO/TC 212.

In December of 2017 the FDA announced that they would leverage the work done by standards development organizations that develop breakpoints, such as Clinical and Laboratory Standards Institute (CLSI), and recognize those breakpoints when the FDA agrees that they are appropriate. FDA currently recognizes seven CLSI standards, either in whole or part, which contain standardized reference methods that measure the susceptibility of bacteria and fungi to antimicrobial agents on their website.